Very often the maintenance of industrial machines is performed only after the scheduled mandatory checks, i.e. the units are disassembled only for the preventive inspection and subsequent repair, if necessary.

Such an approach to repairs cannot prevent sudden damage of wear parts; instead, it accelerates their wear. Besides, the improper assembly after the preventive inspection causes subsequent deformations, thus shortening the unit service life.

This problem can be solved by implementing continuous control over the unit status parameter change. Such a method is particularly recommended for expensive units whose failure may halt all the production process.

One of the best types of technical diagnostics which ensures operational control of parameters of the machinery current status during its operation without demounting is the vibroacoustic diagnostics. The controlled parameter, in this case, is a vibroacoustic signal containing the information on the oscillation process.

In this document, pump units at oil depots are taken as an example for the vibrodiagnostics.

Oil depots are equipped with various pumping stations which are the most important facilities intended for oil and other liquids pumping and feeding. Pump vibrations are the main indicator to be periodically controlled using the measuring instruments.

To detect defects in a unit, the information obtained at the measuring points and measuring directions (whether vertical, horizontal, or axial vectors) is used. Fast intermittent shifts point at the fault process in a machine. Damage cause detection, i.e. diagnosis of the fault, is performed based on the changing parameters of the signal.

The following vibration parameters are controlled:

There is a huge variety of electric converters which convert mechanical oscillations into the electric signals: piezoelectric, inductive and eddy current, capacitive, piezoresistive, etc.

Unlike other types, the piezoelectric acceleration meters are efficient in measuring any oscillation values within practically any dynamic and frequency ranges required. Such sensors are often used for measuring mechanical vibration and impacts.

Since a pumping unit is a frame with elements for attachment to the foundation of the receiving and discharge pipelines to the headers, the frame is impacted by strong vibrations during pump operation. Measurement and monitoring of such vibration parameters can be performed using BC 110 accelerometers.

To evaluate the rigidity of the frame attachment to the foundation, the vibration is measured on all elements holding the pump on its foundation. The measuring is performed in the vertical direction on the anchor bolts (heads) or near them, on the foundation, within max. 100 mm from the anchor bolts. The measuring is performed during the scheduled and unscheduled vibration diagnostics. The most important and reliable sign of rigidity loss is change of the vibration pattern after passing through the defective junctions. To detect the latter, a contour characteristic curve is taken at different points of the object and its elements by measuring the amplitude and phase of the vibration on the first (and, sometimes, higher) harmonics.

A rotor system of pumps is also impacted by intense vibrations: it is composed of electric engine and pump rotors connected by a flexible coupling and bearing inserts.

During a long-term operation, bearings wear in both types of pumps, which leads to the increased vibration of the unit. Long-term operation of worn bearings causes the rotor imbalance which has the following consequences: increased power consumption, bearings and brackets overheating, interference with the impeller casing, imbalance and interference with the gland packing casing.

Unit rotor system failures can be detected or prevented using BC 111 accelerometers which are installed in three mutually transverse axes of the engine bearings and the pump itself. Bearings status is assessed in 4 frequency bands based on results of the sensor signals digital processing.

The accelerometers used for measuring and analysis are connected to the ZET 017-U8 FFT Spectrum Analyzer without preamplifiers. FFT Spectrum analyzer provides support for the measuring transducers and contains a power supply unit, converts the analog signal into a sequence of digits and transmits the signals for their subsequent processing on a PC with the ZETLab software package installed. The analyzer supports the standard interfaces for PC connection: USB, Ethernet, Wi-Fi.

Other instruments can be connected to the FFT spectrum analyzers as well to ensure a more detailed pump diagnostics, thus minimizing the cost of monitoring and diagnostics of a large number of remote equipment pieces.

You can also build a measuring system using the smart sensors, as shown in the figure below: 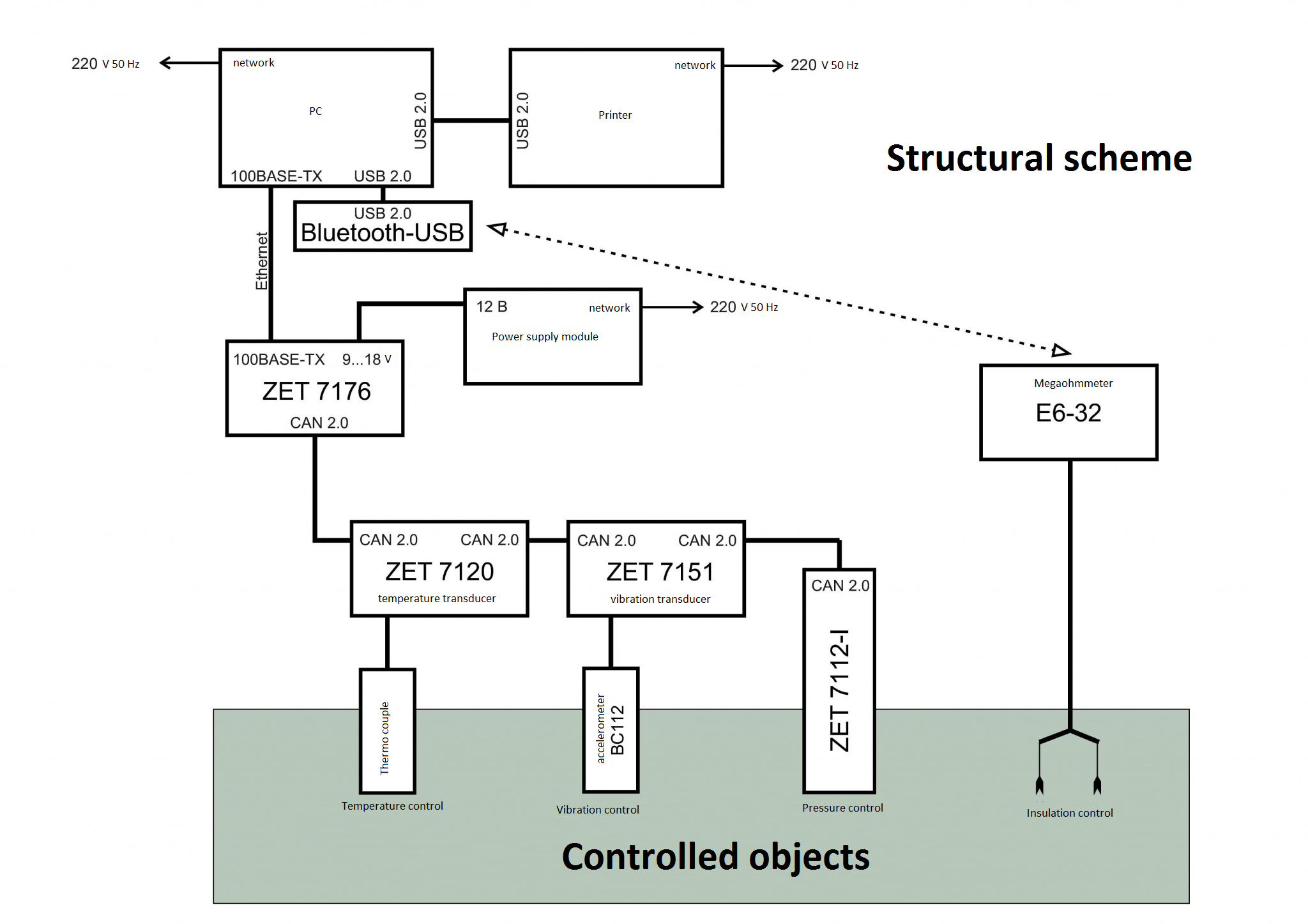